The treatment of Japanese Canadians and Japanese nationals during the Second World War is a dark period of Canadian history—a period few Canadians fully understand or want to discuss. 70 years later, in 2012, the University of British Columbia recognized its own involvement in this lamentable story.

During the Spring 2012 congregation, UBC granted honorary degrees to the 61 students who were unable to complete their university studies. An additional 15 students had their original degrees re-conferred; they missed their graduation ceremony when they were sent to internment camps in 1942.

“If these students had been allowed to continue living in their communities, then they would have finished their initial plans for education,” said Mary Kitagawa, a retired B.C. high school teacher who has led the campaign for UBC honorary degrees. “These people’s lives haven’t been completed in the way they had planned and that is the great injustice.”

In 1942, when Prime Minister William Lyon Mackenzie King invoked the War Measures Act following the attack on Pearl Harbor, 21,000 Japanese Canadians were forced to leave their homes and the west coast for internment camps, prisoner of war camps, sugar beet farms and work-prison camps. Most had their property confiscated by the Canadian government. Many lost everything except what they could carry with them.

This disruption changed the course of UBC students’ lives. Few were able to complete their studies after the war because their family or financial circumstances no longer made this possible; others ended up at universities in eastern Canada.

In the United States, where similar events occurred, state governments and universities in California, Oregon and Washington have granted honorary degrees to their former students. Kitagawa followed closely developments in the U.S., and seeing the powerful impacts of these symbolic gestures on students and families, she first suggested in a 2008 letter that UBC follow suit.

“My parents instilled in us that if you see something wrong happening, we should voice our discontent,” said Kitagawa, who has spent her adult life in the Lower Mainland and is an active member of the Japanese Canadian community. “Someone had to speak out for these students.”

From the time Kitagawa’s letter was received, UBC was eager to take action. But as often happens, this simple concept turned out to be a complex undertaking. For members of the Japanese Canadian community, the months of inquiry, meetings and deliberations felt like an eternity.

“One of UBC’s mistakes was that we didn’t bring the wider community into our planning and discussions right away,” said Henry Yu, a UBC history professor.

Kitagawa’s letter was discussed by the Senate Tributes Committee, the body responsible to decide how UBC ought to respond. A task force was set up to determine whether the university would opt for individual recognition, or for a larger initiative.

“To make an individual recognition ceremony possible, the UBC Senate had to create a new form of honorary degree that would not duplicate the original degrees that some of the students had been granted, and that allowed for some flexibility in our usual process,” said Sally Thorne, chair of the Senate Tributes Committee.

When the motion for this special honorary degree was brought to the University Senate, it received unanimous approval.

To complicate matters, the university did not have an official record of the UBC students affected by the internment.

Fortunately for UBC, Kitagawa, her husband Tosh and other members of the Japanese Canadian community took on the task of finding and identifying those students. Through news media and word of mouth, the couple almost single-handedly reached out to the community, asking former students or relatives to contact them.

“They produced this remarkable list that identified the students who had been forced to leave,” said Alden E. Habacon, director of Intercultural Understanding Strategy Development at UBC. “We were able to check that list with our enrolment records but we would never have been able to produce that list without the community.”

In November 2011, the UBC Senate approved three measures to recognize what happened to the UBC students: the students will be awarded honorary degrees in May of 2012, the university will develop initiatives to educate future students about this shameful period in history, and the Library will preserve and bring to life the historical record of that time.

“These students earned the right to study at UBC and purely by virtue of their ancestry, that right was taken away,” said Shirley Nakata, UBC’s Ombudsperson for Students and the Co-Chair along with Habacon of the university committee charged with implementing the Senate’s three measures.

“The convocation is about honouring these students, acknowledging what was lost and formally welcoming them to the UBC Alumni family.”

“I’m very pleased with the outcome, especially for the students,” said Kitagawa. “When I told them the news, they were so happy. Some students said they never expected this to happen in their lifetime.”

For many of the 76 students who received their degrees in May of 2012, the good news came too late; family members were invited to receive the degrees on their behalf. The 22 living students range in age between 89 and 96 and are scattered from Nanaimo to Ontario and beyond. One man lives as far away as Japan and yet, he made the trip in May of 2012 with his two daughters.

Part of UBC’s acknowledgement of what happened in 1942 is the UBC Library project to collect and archive stories from individual students, to document how their lives were forever altered because of what happened. The Library will also digitize a national Japanese Canadian newspaper from the time.

“I am proud that UBC is making broader commitments to rethink our curriculum and academic programs, and to archive a part of this history; we are going a step further than simply awarding degrees,” said UBC President Prof. Stephen Toope.

“As a university, we aim to create a more compassionate and thoughtful environment where students, faculty and staff can act as global citizens and we do this by recognizing injustice and taking steps to learn from it,” he said. 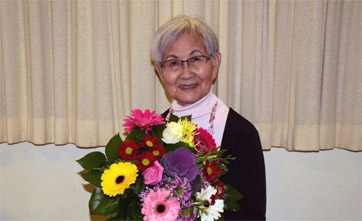 Mary Kitagawa has led the campaign for UBC to award honorary degrees to the Japanese Canadian students affected by internment. Tosh Kitagawa Photograph

“I was very pleased with the outcome, especially for the students,” said Kitagawa. “When I told them the news, they were so happy. Some students said they never expected this to happen in their lifetime.”

Although the Canadian government implemented internment, the role and responsibility of UBC regarding its Japanese Canadian students remains an uncomfortable question. Many U.S. universities protested the inclusion of Japanese American students in the forced removal, tried to place their students at other universities or supported the completion of their degrees during the internment.

This was not the case at UBC. Even before internment, Japanese Canadian students in the university’s Canadian Officers Training Corps (C.O.T.C) had their commissions stripped by the university’s Senate Committee on Military Education. Two UBC faculty members, Henry Angus and E.H. Morrow, were among the few who spoke out against the injustice.

Part of UBC’s acknowledgement of what happened in 1942 includes a UBC Library project to collect and archive stories from individual students. The Library was involved in recording the students’ oral histories, which will be added to the holdings at University Archives.

Some of these oral histories were used to create the film A Degree of Justice: Japanese Canadian UBC students of 1942, which tells the story of six former UBC students.. The students recall growing up in Vancouver, attending UBC and coping with the many hardships caused by their removal. They also speak about UBC’s efforts to formally recognize and honour them.

The Library is also digitizing Tairiku Nippo, a newspaper documenting Japanese-Canadian life from the early 1900s until 1941, when it was forced to cease publication. This project honours the Japanese Canadian community, as the Nippo is an invaluable resource to those researching Japanese Canadian history, including community members hoping to learn more about their family histories. For a preview of the digitized newspaper, visit the UBC Library Digital Collections http://digitalcollections.library.ubc.ca/cdm/landingpage/
collection/tairikunipp